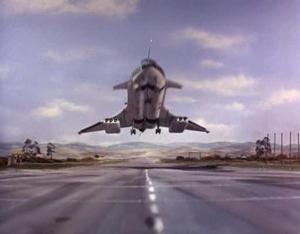 A military aircraft takes off to make an important delivery but is quickly shot down by three enemy fighters, marking the third time a transporter has come under fire. Though the Air Force is mystified, Alan Tracy makes the keen observation that a live version of the song ""Dangerous Game"" had been playing on the radio at the time each of the three attacks occurred. Thinking that there may be a connection, Jeff Tracy sends Tin Tin and Lady Penelope to investigate the Cass Carnaby Five, the group behind the song with the mysterious power to disrupt military operations. Luckily for Tin Tin and Penelope -- sporting a brunette wig and posing as lounge singer Wanda Lamour -- the group is performing at Paradise Peaks, a posh Swiss resort. The two lovely heroes fail to make much progress in cracking the case, but they do an awful lot of flirting!