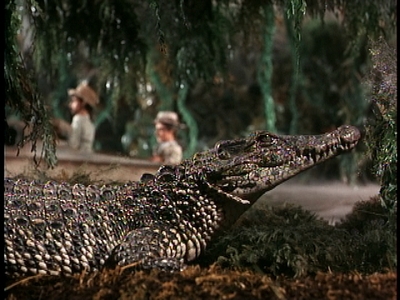 Attack of the Alligators

At the request of two scientists with a business proposal, Mr. Blackmar heads deep into an alligator-infested swamp to learn about a revolutionary new drug. Derived from a rare plant that grows only in their part of the river, the two scientists' drug will eventually put an end to world hunger, thanks to its ability to enlarge animals many times their usual size. Unfortunately, Culp, the scheming boatman responsible for transporting Blackmar to the laboratory, overhears the conversation meant only for the ears of its three participants. When a storm forces Culp and Blackmar to spend the night at the scientists' home, Culp seizes the opportunity to steal the drug while the others are asleep. He clumsily spills some of it down the drain, not realizing the consequences until a giant alligator tips his boat the next morning. Though the thief has apparently been eaten, Blackmar makes it to shore with the help of one of his hosts, and the three men retreat into the basement laboratory. They