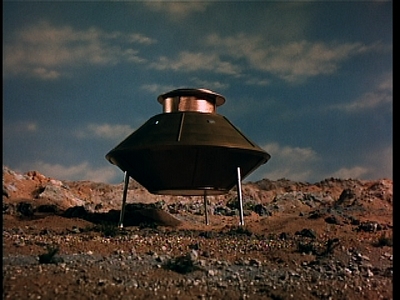 Two skeptical police officers responding to reports of a flying saucer are quickly made believers when Martians chase them into a cave and begin filling it with a mysterious gas. Is the planet under attack? Not exactly, but it may soon be, thanks to an old nemesis of International Rescue. Both the cowering cops and alien aggressors are actors filming a scene for a movie, bankrolled by none other than the Hood! No, he hasn't gone straight; it's simply an elaborate plan to capture Thunderbird 1 on film. When sabotage on the set brings down the side of a mountain around the two actors in the cave, Scott Tracy speeds to the scene, with Virgil close behind. They set out to save the trapped men, unaware of the Hood's involvement. Much like his previous attempts, the plan to photograph an International Rescue vehicle is doomed to failure, thanks to Thunderbird 1's automatic camera detector. Or is it? And what role does Kyrano, Jeff Tracy's trusted servant, play? Despite failing time and time