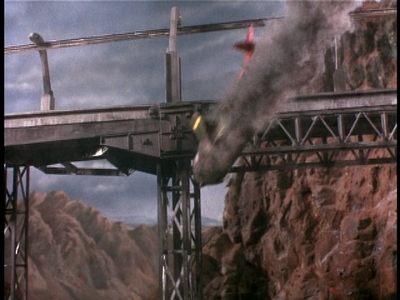 Late for an appointment in her library, Lady Penelope must resort to drastic measures to shake two persistent gunmen in hot pursuit of FAB 1. With only a fireball in her rearview mirror, Penelope is finally free to greet her guest, but is she in far greater danger at home than on the open road? Her guest, named Warren Grafton, is actually a money-hungry con man intent on securing investors for his transcontinental monorail, and he won't take no for an answer. Lady Penelope's pledge to put him in touch with a wealthy friend isn't enough to deter him from planning an uninvited visit later on and emptying the contents of the library's safe. The wealthy friend is Jeff Tracy, who with the help of Brains and Tin Tin accepts a ride on the monorail to determine whether the investment is a sound one. Grafton seems more concerned with money than passenger safety right from the beginning, and is defiant when questions are raised over the issue. Grafton's arrogance over the unmanned monorail may b