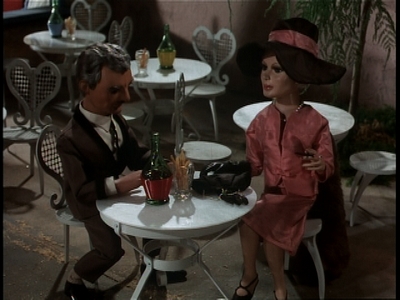 The Perils of Penelope

Sir Jeremy Hodge -- without whom Brains could not have built any of International Rescue's vehicles -- has just finished his latest project, converting seawater into fuel. Sir Jeremy has little time to celebrate the accomplishment, however, as his colleague on the project has gone missing, mysteriously disappearing from the train on which he was traveling. Fearing that the knowledge possessed by his friend could be devastating should it end up in the wrong hands, Sir Jeremy arranges a rendezvous in a Parisian cafe with his old friend Lady Penelope. One barely avoided poisoned drink later (thanks to some quick thinking by Parker), and Penelope is off on yet another mission. Investigating a clue left behind at the cafe by the would-be assassin leads only to another attempt on her life, as Parker must again save his enchanting employer and her companion, this time from gas flowing into a windowless basement. Left with no options other than to ride the same train that prompted their investigation.