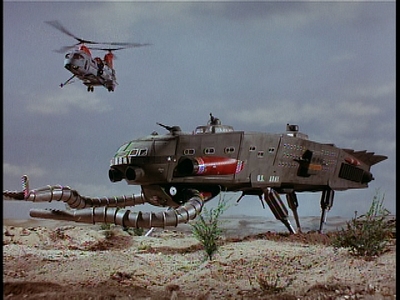 In a faraway jungle, the US Army has just finished three weeks of successful testing for the Sidewinder, a new transport vehicle. However, the congratulatory pats on the back prove a bit premature as the sidewinder fails to reach it's rendezvous point The ground crew sees smoke but there are no sign of the vehicle and attempts and contacting the sidewinder crew goes unanswered. When the crew finally responded, it is revealed that they have tipped over on their side and are unable to move! The fact that they have fallen 300 feet into a crater and are engulfed into flames makes it even more disastrous. Being so far from civilization, the Army isn't as alone as it thinks, as International Rescue has been listening in on its plight with great interest. For the moment, however, they choose to wait to see what happens. After two Army rescue attempts result in hospitalization, Jeff Tracy sends his sons out to try and help. But will they succeed when others have not?