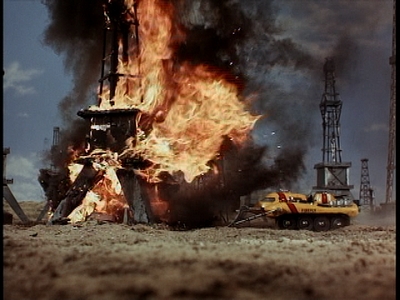 While on their way back to Tracy Island from extinguishing an oil well fire, Scott and Virgil inadvertently cross paths with the Sentinel, a new naval strike vessel. Mistaking Thunderbird 2 for a hostile aircraft, the ship fires several missiles and manages to connect, despite evasive maneuvering by Virgil. With Thunderbird 2 sustaining tremendous damage, Virgil slips into unconsciousness, barely awakening in time to pull up from his dive and continue toward home. Thunderbird 2 struggles to remain airborne and crashes just as it reaches the island, once again knocking its pilot out cold. Finding himself in the comfort of his own bed, Virgil again opens his eyes at just the right moment, this time to witness a broadcast of the Empire State Building's relocation. Nothing could possibly go wrong with hydraulically lifting a 102-story building and transporting it along tracks to its new destination, could it?