End of the Road

Only days away from monsoon season, Eddie Houseman's construction company is racing against time to complete a mountain road and fulfill a contract. With the end seemingly in sight, Eddie sets off on a long-overdue vacation, to look up an old friend. When that friend happens to be Tin Tin, however, it's Alan Tracy who's left out in the cold -- and mocked by his older brothers for good measure -- while the two lovebirds jet set around the island. When Eddie stands up Tin Tin after receiving an urgent message from his company, Alan thinks his troubles are over, until he said the wrong things to tin-tin which causes the object of their affections to promptly storm off. Meanwhile, Eddie receives the disturbing news that seismic activity in the mountains, combined with heavy rains, threatens to halt the entire project. Seeing his future crumbling before his eyes, Eddie sneaks off against his senior partner's wishes to detonate atomic charges on the mountaintop, in hopes of forcing destructi 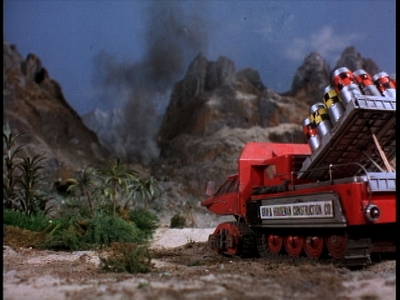