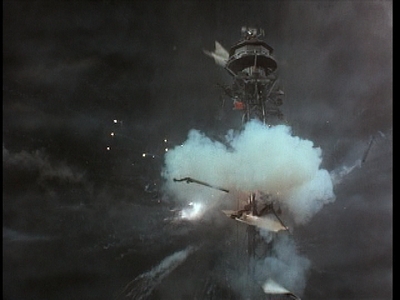 The Hood is back and again up to no good, this time ordered by the evil general for whom he works to destroy the Red Arrow, a state-of-the-art fighter jet and the only thing standing between his boss and world domination. Thanks to the Hood, the first test of the Red Arrow ends in a spectacular crash, killing the pilot and leaving Colonel Tim Casey disgraced and off the project he was tasked with leading. Casey unexpectedly turns up at Tracy Island to seek advice from Jeff, an old buddy from the early days of space exploration. Despite help from Brains, the second Red Arrow test is destined to end the same as the first, because the Hood won't receive payment from the General until each plane is destroyed. Planting a homing device to pull the aircraft off course, the Hood causes it to crash into the control tower, leaving the two men at the top teetering and clinging to life. Can anything save them from falling to their deaths? And can anyone stop the Hood from carrying out more destruc