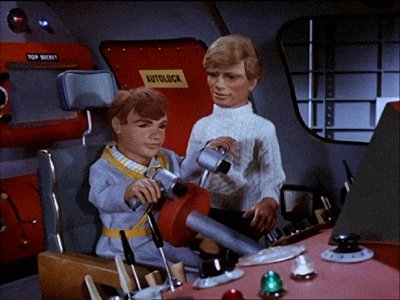 International Rescue has just wrapped up another successful mission, helping to extinguish an out-of-control blaze and pulling the men trapped by it from the bottom of a shaft. The mission hasn't run as smoothly as initially believed, however, as Jeff Tracy detects an intruder aboard Thunderbird 2. With blasters drawn, Jeff, Scott and Gordon converge on the hangar, only to discover the ""saboteur"" is a little boy that stowed away in an unguarded pod after excitedly witnessing the rescue in action. While Mr. Tracy gives three of his sons a stern lecture about the security breach, Virgil is supposed to be babysitting -- and keeping his mouth shut. He does a good job of it, until the boy challenges his manhood by saying that Thunderbird 1 -- Scott's ship -- is the best. Virgil's response to the inadvertent verbal slight is to fold like an accordion, spilling his guts about their adventure in episode 14. After Dad summons Virgil to his office, Alan assumes the task of watching the child. He