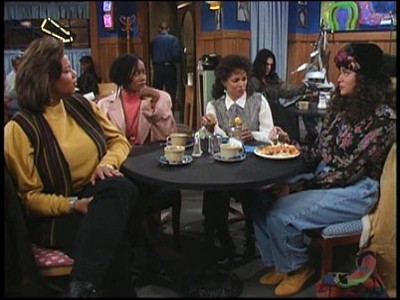 Kyle convinces Overton to double date with his old girlfriend and her cousin, Summer. Overton and Summer hit it off at dinner, but he feels as though he is cheating on Synclaire. Kyle reminds him that Synclaire has never shown any romantic interest in him, and encourages him to ask Summer out. When the girls run into Overton and Summer, Synclaire becomes very sad. After she makes many catty remarks about Summer and her hat, her friends suggest that she is jealous, and encourage her to make a move. Synclaire refuses to interfere, and instead hurts Overton's feelings by sending a tape deck he was to repair to Dr. Fix-It. The girls urge her to share her feelings with Overton. After he sends Summer away, Synclaire asks him to come downstairs. She initially tries to say something profound, but finally gives up and plants a kiss on him. Meanwhile, the upstairs neighbors annoy Khadijah and Regine by having sex constantly. The girls are impressed to learn that an elderly couple is responsible.