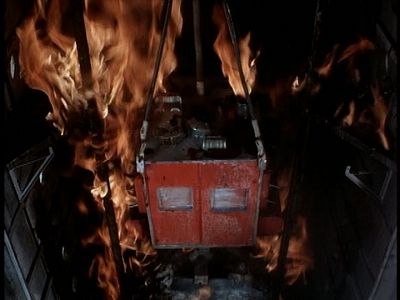 On his way home to celebrate his third wedding anniversary, Thomas Prescott is forced into an unexpected detour after picking up a hitchhiker. Upon dropping the man at what is supposedly the home of the hitchhiker's doctor, Prescott finds himself thanked with an explosive device clamped to his wrist and not much time to remove it before it detonates. The hitchhiker informs his confused victim that the key is hidden in his office and instructs him to leave the device in a file cabinet once it has been removed. Racing against both time and the police, Prescott does as he's told, but he's trapped in an elevator while fleeing the now-burning building. International Rescue has been monitoring the happenings and decides that now is the time to spring into action. But have they sat on the sidelines too long? Will they arrive in time to pull Prescott from the bottom of the elevator shaft in which he's trapped, or will the fire prove too much even for International Rescue's advanced equipment?