After arresting the murderer of Amber-Lynn LaPierre and discovering a mass grave site containing the bodies of dozens of missing children, a man comes to Mulder and claims to have had visions of other victims who aren't buried at the site. Despite Scully's objections, he takes Mulder on a journey which reveals what truly happened to his sister. 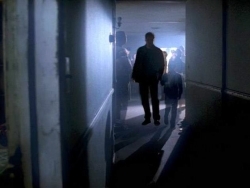