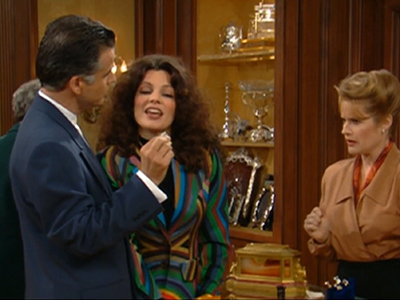 Fran's been going out with a rich, handsome Jewish doctor named Julius Kimble. After only 2 weeks, he asks her to marry him. Although having some doubts about it, Fran accepts after Sylvia pushes her into doing it. When they go out to buy Fran a ring, Julius disappears and takes the very expensive ring with him. Turns out he was just a thief and now Fran is left all alone. She blames her mother for the disaster and the Fine women end up going to a shrink to solve their problems. Back at home, both Mr. Sheffield and Fran complain about the lack of single attractive people for them to date.