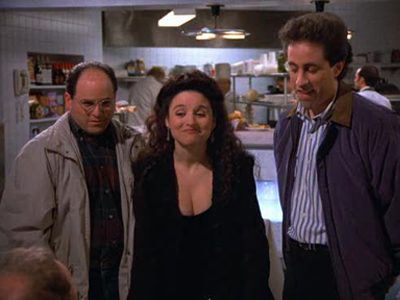 Jerry and George struggle to keep their idea for a TV series alive, one of their problems is they don't know how to do the Elaine character. Jerry meets an old girlfriend he never could kiss, later Kramer gets the opportunity. The ex-girlfriend talks about Elaine's shoes, mainly because she wants them. George is caught staring at the cleavage of the daughter of the NBC executive who is approving their script. Elaine's cleavage provides a means to turn the tables on him.