Event: CZECHOSLOVAKIA 1720 A.D. In the past, a vampiric count disappears with a chalice, just ahead of an angry mob. In the present day, sexy vampire writer and lecturer Lucas Blackmer asks Sydney for help in finding the chalice, which is purported to help keep a vampire alive. Count Stanislov disappeared with it three hundreds year ago. Karen and Nigel investigate Blackmer's apartment and find evidence that suggest he may be a vampire (contact lens, sunblock, a coffin). They are attacked by Kantor, a vampire hunter, who lets them go. Meanwhile, Sydney and Lucas are investigating Stanislov's castle. They find a nearby crypt, which guides them to a hidden tomb beneath a fountain in Prague. Kantor, who believes in vampires, tries to kill them rather then let them get the chalice. Lucas bleeds like any normal man, and Sydney punches out Kantor. At the end they find out that Lucas likes to ""get in character"" as a vampire and has used the adventure as the inspiration for his next book...wit 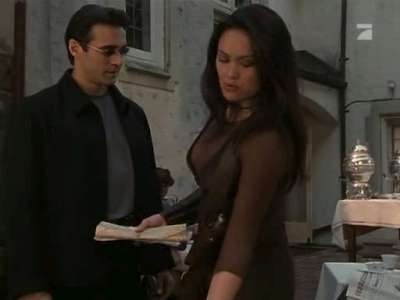