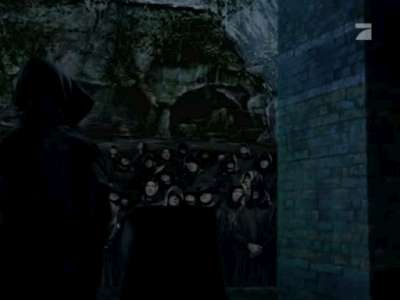 Event: ST. BEATRICE'S SCHOOL FOR GIRLS 20 YEARS AGO In flashback we find out that Sydney's mentor at boarding school was an archaeologist, and was murdered over an Egyptian necklace. Young Sydney witnessed the murder, and can identify the killer's face. In the present day, she is contacted by her roommate Darcy Lowe, who needs her help to find the necklace and bring the murderer to justice. Darcy, Sydney and Nigel travel to find the necklace, only to find out that the murderer was Darcy's father. He was unjustly accused, since Sydney didn't see the real murderer off to the side who shot her teacher. The real killer is the mysterious Deviega, who is the head of a cult devoted to recovering the two parts of the necklace. Infiltrating a ceremony, Sydney tries to capture Deviega and avenge her teacher's death, but he escapes.