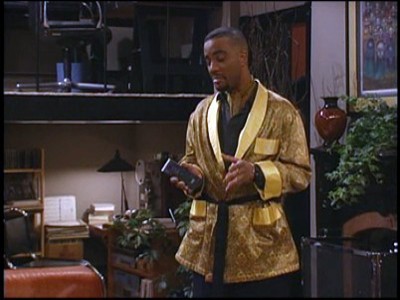 Hot Fun in the Wintertime

Synclaire wins a trip for two to the Bahamas from a radio trivia contest, but cannot decide who should accompany her. Khadijah and Overton irritate her so much with their petty bickering and attempts to manipulate her that it nearly drives her crazy. Regine advises her to stand up for herself and not let the duo's behavior affect her. Synclaire becomes so fed up that she tells Overton and Khadijah that she is taking Regine on the trip. At her beach-themed party (selected because the heat was out of control), Regine bows out and urges Khadijah and Overton to stop pressuring Synclaire. Regine claims her act is one of genuine kindness, but a man had actually asked her to go to Aspen the same week as Synclaire's trip. Synclaire selects Overton, and Khadijah is proud that her cousin is growing up (because she dumped her for a man). Kyle and Max continually play practical jokes on one another to screw up each other's love lives. Max believes Kyle has gone too far when he invites Goldie to th