When Samson announces that the carnival's next stop is in the Christian camp of New Canaan, California, both Lila and Stumpy challenge his authority. Jones arrives back with the troupe and gives Samson the information what he and Ben found about Brother Justin. Meanwhile, Libby urges Jones to reveal the secret of Ben's powers to the rest of the troupe, despite Samson's protest. While Ben infiltrates Justin's ministry camp to look for him, he finds Sofie being baptized as a new converts when a new tragedy rises from the pond... in the form of the murdered Eleanor. Later, Justin is startled by a development in the migrant camp when Samson and Jones arrive and persuade Iris to let them set up shop there. That night, when Ben wants to make his move to kill Justin, Jones intervenes and urges patience. 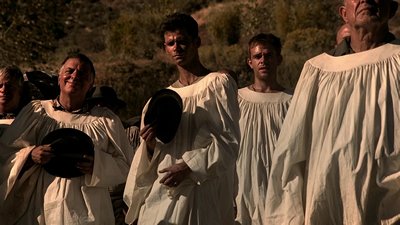