In the cliff-hanging season finale, Samson devises a grand plan by scheming with Ben, Jones, and the entire troupe to lure Brother Justin to Carnivale for his confrontation with Ben. Meanwhile, Stroud wants to protect Justin who correctly suspects that the carnival is setting a trap for him. Sofie finds herself locked in a dark shed after she tells Justin her conflicted thoughts about where her loyalties lay, and soon becomes terrorized by ghostly visions of her mother. Rita Sue is touched by Samson's generosity of giving her the money needed to pay off Stumpy's loan shark. Later, the final confrontation approaches when Brother Justin persuades Iris to overcome her fear of heights by riding the Carnivale Ferris Wheel where Jones traps both of them in for Ben to drain Justin's powers, and Ben performs his most important healing of Reverend Balthus, leading to Ben and Justin finally meeting face-to-face, and the visions of Ben and Justin becoming full circle. At the same time, Joney sets out to rescue Sofie from Stroud, but soon realizes (way too late) that she has made her choice to which side her loyalties are. 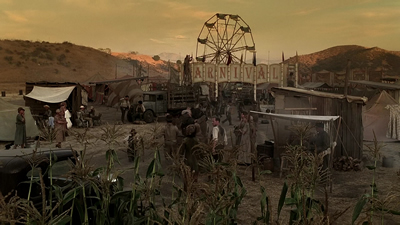