The Canadian west is opened by the great fur-trading empires of the Hudson's Bay and Northwest Companies, the native people who were their indispensable allies, and bold explorers and map makers who ventured from the Great Lakes to the Arctic Ocean and long-sought-for Pacific. Pierre Esprit Radisson defies a governor to take New France's trade far into the continent's interior and later, founds an English trading empire; Pierre Gaultier de Varennes, sieur de la Vérendrye, spends a lifetime searching for the Western Sea and pays dearly for it. Tough Dene chief Matonabbee leads Samuel Hearne on a monumental trek into the Barren Lands; Alexander Mackenzie's dash to the Pacific makes him one of the most celebrated men of his age. And David Thompson comes to the forbidding shores of Hudson Bay as a 14-year-old apprentice and eventually unlocks the secrets of the West more than any other man. As the fur trader's day comes to an end, settlers on the prairies and gold miners in British Columbia begin to claim the west for themselves. 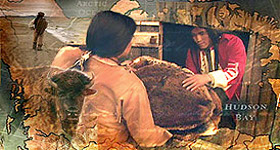