At the beginning of the American Revolution in 1775, American rebels invade Canada but despite the efforts of rebel spies to entice Quebec to join the revolution, les Canadiens refuse to take up arms against British rule, and the invasion ultimately fails. The mass migration of Loyalists that follows - more than 40,000 people in all - creates an English-speaking Canada virtually overnight. Over the next 30 years, the colony continues to develop. When the next American invaders arrive in 1812, they are fought to a stand-still at the battles of Queenston Heights, Chateauguay and Lundy's Lane, setting boundaries that remain today. The cast of characters includes the audacious military commanders General Isaac Brock and Colonel Charles-Michel de Salaberry; Hannah Ingraham and her dispossessed Loyalist family; Benedict Arnold, the notorious traitor to the American Revolution; visionary Indian leader Tecumseh; Pierre Bédard, brilliant tactician of an emerging colonial democracy; and Canadian traitors who are publicly executed near Hamilton, Ontario. 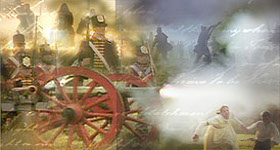