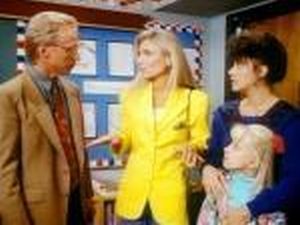 Debbie Kent, Shauni's swim partner, has a very demanding father. She has excellent times but according to her father, they aren't good enough. Therefore he grounds her and forbids her to see her boyfriend Zach. Without her father knowing it, she and Zach have a beach party at the beach. When they decide to go for a swim, a shark attacks Debbie and she disappears. Mitch and Ben recover Debbie's shredded bathing suit. The cove where Debbie disappeared is called Shark's Cove. The cove got that name ten years earlier when a bunch of shark attacks took place there. When Shauni and Harvey find a weight belt under a buoy near the place where Debbie disappeared, Shauni starts wondering if Debbie is dead after all. Later when Mr. Kent has cleared out Debbie's locker, he leaves a book behind. When Shauni take a look in it, she discovers that $ 8 000 disappeared from Debbie's bank account the same day she died. She decides to pay Zach a visit. He refuses to let her into the trailer, and then sud