A tour bus is being taken around the new Atomic Station in Australia that is reclaiming the desert. The reporters are not convinced of the safety of the project due to the risk of a nuclear explosion. Meanwhile the Hood is trying to discover the secret of the plant but is caught by security. In the gun fight follows, the Hood accidently hits a gas pump and it explodes. The fire rapidly spreads through the station and soon the staff have to evacuate. The only thing that could have saved them would be to cut off the sea water intake. The plant explodes and sends a radioactive cloud towards Melbourne. But about a week later the wind pushes the cloud back into the desert. 12 months later, a European professor has a group of army representatives to show off his new invention: the Mighty Atom. It is a very powerful camera concealed in a robotic mouse that takes photos of control panels by recognizing the profiles of people who use them. After a brief demonstration, one of the representatives is revealed to be the Hood in disguise who hypnotizes everyone and steals the invention. He immediately visits a new Atomic Station in the Sahara desert that is just beginning operations. Using the Mighty Atom, he takes photographs of the station's control room. After he completes his mission, he gets the idea repeat the accident that destroyed the Australian plant last year in order to lure out International Rescue and steal their secrets, too. He plants bombs around the plant and they explode, causing a fire that rapidly spreads. In the control booth, the controller realises that sabotage is afoot and calls International Rescue. Thunderbirds 1 and 2 take off with Thunderbird 4 and Lady Penelope, who has been desperately waiting to go out on a rescue mission. Virgil drops Thunderbird 4 and Gordon near the sea water intake of the plant. When they land at the plant, the Hood sends the Mighty Atom into Thunderbird 2 with Penelope still inside. Meanwhile, Scott and Virgil push in the con 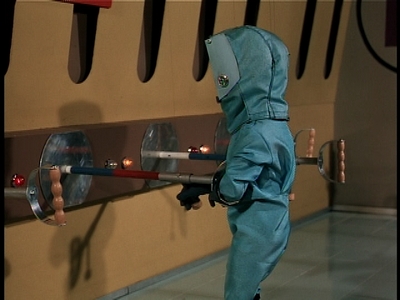