After not knowing Fox Mulder's whereabouts for the last year, A.D. Skinner and Agent Scully learn he's being held for the murder of a military man he couldn't possibly have killed: Knowle Rohrer, one of the government's secret super-soldiers. With Skinner acting as Mulder's defense, people who Mulder has dealt with during his last nine years as an FBI agent testify on his behalf. But the military tribunal isn't interested in the truth. 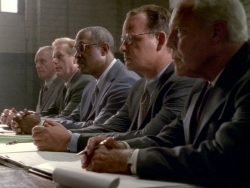