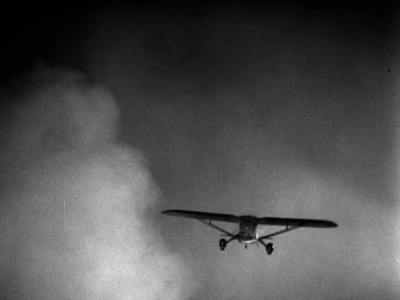 1932. Chicago is a thirsty town, consuming 86,000 gallons of booze a day; that's 32-million gallons a year. Almost all this booze is beer and rotgut, but 1% is the finest Canadian scotch. Nitti's boys, armed with tommy guns, shoot up a rival speak, the Blue Lion, that's serving the Canadian scotch. Ness and his men investigate; 2 people dead, 3 critically injured. Nitti's plenty sore; there are half a dozen clubs, roadhouses just outside of Cook County, serving Canadian scotch. Where are they getting it? Just then, a bomb goes off in the Montmartre Club; Nitti and his boys are unhurt, but 6 pedestrians and a taxi driver are injured. Nitti orders in 100 hitmen from Detroit. It's a Gang War! To prevent further killings, Ness arrests Nitti and confiscates his gun. Although Nitti is sprung within the hour, Ness blackmails him: Ness tells Nitti, if one more person is killed in the gang war, ""Lee Hobson's gonna put a bullet in me with your gun."" (In the arm or leg, I suppose. Thi