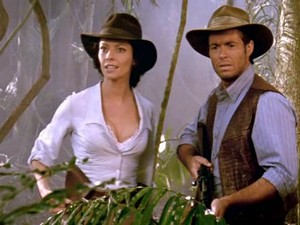 When Marguerite starts being nice to everyone, they wonder what she's up to. Even when pushed to find out why she's acting this way, she maintains her uncharacteristic serenity. In the jungle, Roxton and Veronica are attacked by a dinosaur that after giving them a huge scare, starts to move very clumsily, giving them a chance to escape. We learn that an alien invader, who could not control the dinosaur's huge body, occupied it. We also learn that Marguerite's body has been possessed when she drops her spoon into a vat of boiling water and plunges her arm in to retrieve it - with no ill effect. We discover that the Alien Invaders are skeletons that our heroes have to fight.