Challenger, Malone and Veronica are searching for sulfur, in order to make more gunpowder, when they walk into a burial ground. They are attacked by warriors in black and white paint who capture Challenger. That night the group sneaks into the warriors' village...to find Challenger sitting quietly and drinking tea with a beautiful blonde woman named Cassandra. She and her husband had been part of an early expedition, also stranded and found by the warriors tribe twelve years ago; they were soon made king and queen there. She tells our group that going onto the burial grounds was considered taboo, and for this Challenger would have to remain captive for life. The only way they can save him is by going to the Cave of Fear and retrieving her husband's bones for burial. They set off, but soon discover why the cave is avoided ~ it's walls are covered in a hallucinogenic fungus, wtih a really nasty additional effect. It drives those affected to suicide - which Cassandra apparently knew when 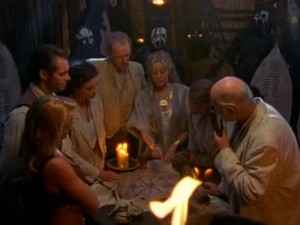