The 2003 Ninja Turtles find their 1987 originals captured and held hostage by Hun. The 2003 Turtles defeat Hun, and the Purple Dragons and rescue their classic originals and escape to the modern Turtles' Lair. Meanwhile, the Technodrome from the 1987 TV series along with Shredder, Krang, Bebop and Rocksteady are together again and fight both versions of the turtles. Meanwhile the classic Shredder, transports the Utrom Shredder back from the ice asteroid that he was sent to after the "Exodus" episode. The classic Shredder and Krang had no idea that the modern Shredder would turn against them and sets out to erase the entire Ninja Turtle Universe, starting all the way back to the 1984 Mirage Comic series to where the Ninja Turtles are as of today, including the 1987 TV series Turtles, the live-action turtles, all the comic book turtles, and the modern TV series Turtles. 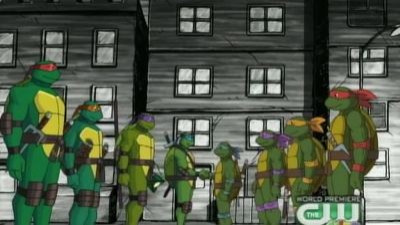