Bill and Jeff are discussing the best means of eluding Urko's troops when Judy appears and insists they come to the below world and bring the laser they rescued from the ship. If they delay, Krador and the Underdwellers will perish. The men suspect a trap, but if Judy is in danger, they have to risk the trip. In the below world, Judy and Krador are watching a lava flow on the viewing screen. If it reaches the reactor room, the below world (and perhaps the entire planet) will be destroyed. Meanwhile, Gen. Urko is debating with Zira and Cornelius over how best to use the Senate's money: for defense or scientific research. Dr. Zaius tells Urko that he can have the money if he captures Blue Eyes. Bill and Jeff have decided to hide the laser before journeying to the below world in case they walk into a trap. They are able to enter the underdweller entrance without being spotted by Urko's troops, and meet Judy and Krador, who projects images on the wall of the volcano becoming active again and flooding their caverns with lava. It is getting dangerously close to the reactor room. The laser could cut a new path for the lava to flow away from the below world. Bill and Jeff agree to do the job only if Judy be allowed to leave with them. Krador refuses, believing that she is the fulfillment of prophecy foretelling the Underdweller return to the surface. Finally, he agrees to release Judy if she will return when needed. Meanwhile, gorillas have found the laser and take it to Urko, who deduces that no one --ape, human or Underdweller -- could be responsible for such a weapon except Blue Eyes. Realizing that Bill must be in the area, the army upscales its search. Arriving at the spot where they left the laser, Bill and Jeff see tire tracks and know the apes must have found the laser. Sneaking into the army's camp, the men are able to cause a diversion and reclaim the laser. They proceed to the below world, where they lower themselves into the main cavern and begin blasting throug 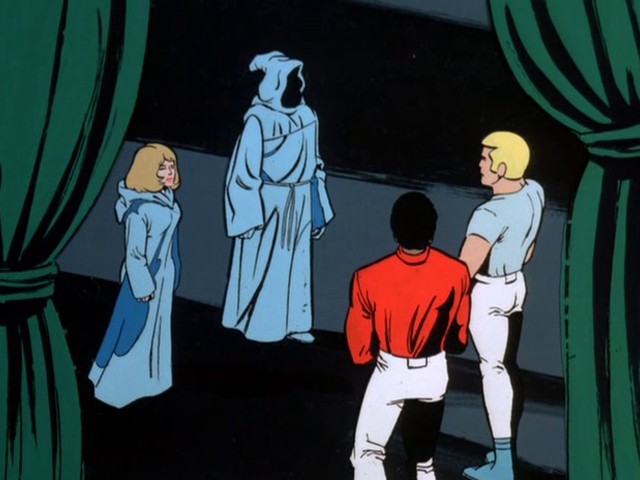