During an archaeological dig, Cornelius uncovers an ancient, human book called, "A Day at the Zoo." He explains to Zira that this book would be deadly to the humans if it ever fell into Urko's hands. It might also finally prove their theory that man preceded the ape. Zira places it in the equipment locker just as Urko barges in. Knowing that Cornelius is digging, Urko wants the lab searched for anything that might prove humans are dangerous. But Cornelius refuses to allow a search unless Urko is granted permission from the Supreme Council. Worried, Cornelius considers putting the book back into the ground, but Urko might just dig it up again and it is too valuable to destroy. Suddenly, he notices that the paper he used to wrap up the book at the digging site is actually an old blueprint for a hot-air balloon. Ape-built balloons have always crashed, but Cornelius feels that this design is different and may work. After beginning work on the construction, he is distressed to find that the part of the plan detailing the steering mechanism is missing, probably destroyed by time. They agree that Bill and Jeff may be able to help. When Bill sees the book, he wants to release it to the public so that the truth of the planet will be known, but Cornelius, fearing the public outcry, wants to hide it on the mountain of Ghar. After completing the balloon, Bill and Cornelius cast off. They reach Mt. Ghar, but are forced far off course by a storm. The balloon hits something and crashes. At that moment, gorilla ski-troopers spot the balloon falling out of the sky. While searching for fire wood, Bill and Cornelius come upon a giant ape statue and figure the region must be inhabited. They set out to find help, still watched by the soldiers. The terrible cold is too much for Cornelius and Bill is forced to carry him. They both collapse and are taken to a shelter by apes. When they awake, they are welcomed to the temple of Kigor, god of the mountain apes. Bill asks the High Lama to 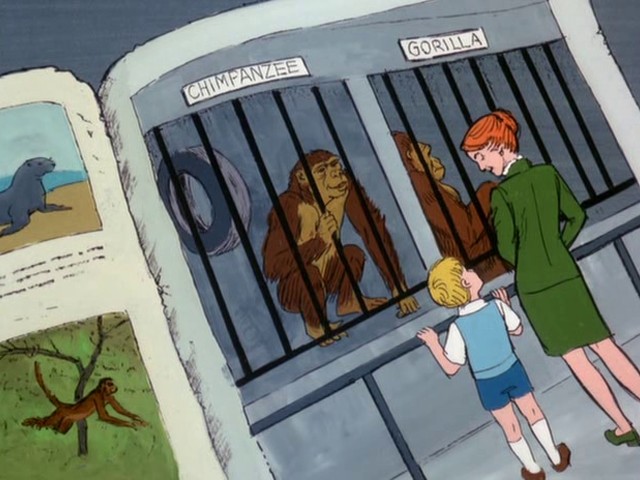