Event: NEW GUINEA 1522 A.D. Sydney and Nigel are on the run from headhunters after recovering a lancet, which Nigel cuts himself with. They are confronted by a rival Relic Hunter who is a dead ringer for Nigel. The man gets himself killed in a trap and the duo escape. While Sydney is at a conference, Nigel is contacted by Cate Hemphill of Interpol. Nigel's lookalike was a relic plunderer named Ian Worthingham, who was planning on selling the lancet. She wants Nigel to pretend to be Ian and find out who they buyer was. Nigel goes along with the plan, and starts displaying incredible strength. With it, he is soon able to dispel any doubts that he might be ""Nigel Bailey."" Nigel soon makes contact with Anjou, a member of the Grel N'toz, a secret society (from ""Sydney at Ten""). Anjou sees through the deception, and grabs Nigel upon whom the effects of the lancet have worn off. Anjou uses the lancet to give himself super-strength, and even a newly-arrived Sydney proves helpless. Nigel cuts h 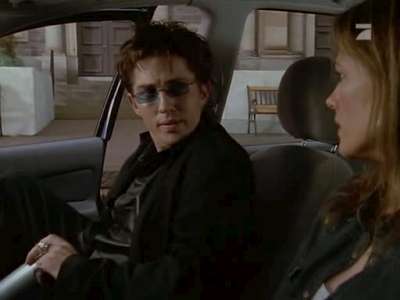