Lincoln tells Michael that they have four more days to rescue Whistler, but Michael is upset with his brother that he used him. Gretchen has a meeting with General and they decide to use power to release Whistler in an operation called "Bang and Burn". Later she asks Whistler to kill Michael. In Sona, the guards reinforce the bars in the windows, and Michael tells Lechero that this way it will be difficult to break-out. Sammy requests more men to Lechero to keep Sona under control. Sofia receives a call from Whistler's mysterious landlord telling that he has some "insurance papers" from her boyfriend, however, the Company intercepts the conversation. When Sofia receives the documents, she finds a passport of Whistler in the name of Gary Miller. But Gretchen arrives and takes the documents. Mahone tells Agent Lang how he killed Shales and then high from the pills, asks her to get some drugs for him otherwise he will not be able to speak in the hearing. T-Bag gives a message from Lechero with the blueprint of his cell with a hidden door and an access code. Whistler is ready to stab Michael when Lechero arrives and he hides the knife. Michael asks McGrady to request his father to call Lincoln and give him a message: "Don't come home for dinner." Mahone fails in the hearing and is sent back to Sona. Lincoln, Sucre and Sofia are attacked by the Company's agents and the brothers realize that something is happening, i.e., the Company does not need them anymore. When the "Bang and Burn" Operation begins, Michael catches Whistler and Gretchen fails in her intent. General Zavala has Michael hauled in for questioning over the attempted breakout. 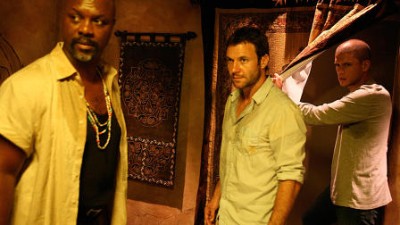