Tyge tells Michael that he and Whistler were co-employees at the McFadden, a hotel in Nice, France. Mahone worries about Tyge's constant, keen observance of Whistler. Having to re-plan hastily, Michael tells Linc to find out the location of the nearby cafe and drug the guard's coffee, and also demands pictures of LJ and Sara before he escapes. Tyge is stabbed to death. Lechero questions McGrady and has Whistler dragged away for a confession. Michael believes Mahone and Bellick's denials. T-Bag offers Michael a ring he stole from Sammy (his rival for Lechero's confidence), to use to frame Sammy for Tyge's stabbing. Michael finds the murder knife under Mahone's bed and goes to Lechero to denounce Mahone, only to find he has just walked out of the prison. Agents Richard Sullins and Felicia Lang arrive at Sona to present Mahone with a plea bargain from the US Justice: a term reduction to 8 years for testimony against the government conspiracy and Lincoln. He could be out in 4 years, but Mahone refuses, now he faces life imprisonment. Lechero administers justice for Tyge his own way. Linc and Sofia succeed in drugging Captain Hurtado, but Susan finds out the brothers had a different timing planned and threatens LJ's life. With no recent pictures available, Linc confesses Sara's death, causing Michael to make a drastic decision. 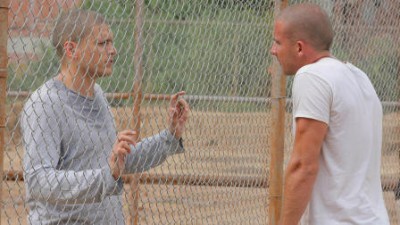