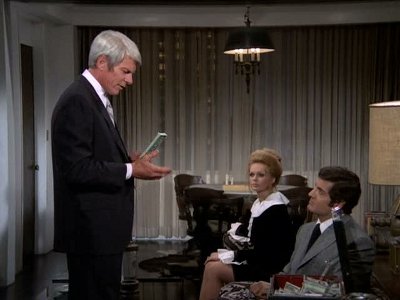 Two underworld leaders, Hatcher and Thorne, have called a conference of Syndicate leaders to form a massive holding/laundering company. The IMF must obtain their joint Swiss bank account number. Jim gets in as a mobster and sabotages the tram that is the only way to the meeting. Willy slips in as a repairman and Casey lures down Thorne, whom they capture and then offer to return to Hatcher in exchange for the exact amount the mob leaders invested. He gets scammed into losing the money and Barney replaces the money in the safe with counterfeits. The IMF makes it look to Thorne like Hatcher kidnapped him then let him escape. When it is revealed the money is counterfeit Jim "rescues" him from being killed by the mobsters, then give Hatcher (with a weak heart) a fake heart attack as they escape down the tram. Hatcher gives Jim the bank account number and the team slips out of the tram with the $4 million while the weakened Hatcher remains behind - when he gets to the bottom he and Thorne k