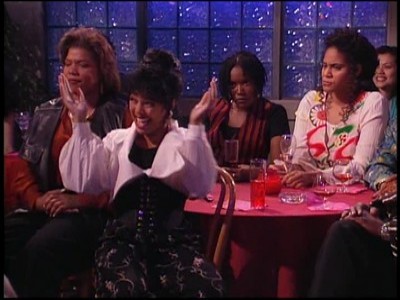 A Tale of Two Tattles

Khadijah, Max and Synclaire are furious when Regine's new boyfriend, Tony, uses embarrassing stories about them in his stand-up act. Although they are angry at Regine for blabbing their secrets, they realize they have all been guilty of this at some point. They vow to no longer engage in gossip. Kyle asks Overton to program his two girlfriends' numbers into his new cellular phone. Overton makes the girls aware of each other's existence when he accidentally calls one when he believed he was speaking with the other. Regine cannot keep her promise to refrain from gossip after she hears the two women comparing notes about Kyle on the street. She tells her friends that Kyle stutters at the height of passion. The girls witness Kyle arguing with both women in the hallway. When they both dump him, Kyle urges his friends to preserve his reputation. ""Maybe we will, maybe we wo-wo-wo-wo-won't!"" Max exclaims. Tag: Tony plagiarizes Synclaire's act in television appearance.