Burglar in the House

After Regine has her purse snatched on the subway, the girls ask Overton to install better locks in their apartment. A nervous Synclaire and Regine insist on sleeping in Khadijah's room. They are stirred by a noise from downstairs, and discover a prowler in the kitchen. Khadijah startles him and drives him from the apartment; but after the girls run up to the guys' apartment, the burglar returns and cleans them out. Frustrated by the police's inability to get any leads on the case, they have Overton install an alarm system and bars on the windows, and ask the guys to stay over for several nights. However, they remain on edge. When Regine goes into the kitchen for a midnight snack, Synclaire freaks out and runs out of the apartment, triggering the alarm. The girls realize that, despite the unpleasant reality of crime, they cannot turn the apartment into a fortress. They volunteer for Neighborhood Watch. Tag: Lily the attack pig. 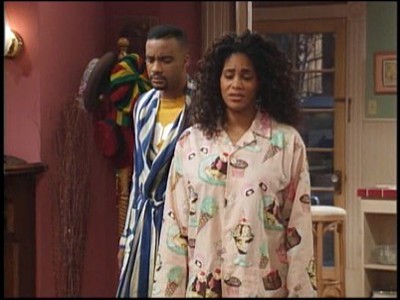