In the Black Is Beautiful

The printer refuses to produce the latest issue of Flavor unless Khadijah can make a $2000 payment. Max offers her the money, but she flatly refuses. Regine tries to raise money by throwing a lingerie party (featuring male model Overton), but Khadijah tells everyone to mind their own business. After Synclaire tells her that the printer has threatened to see to it that Flavor is never published again, Khadijah accepts Max's check. She becomes so obsessed with paying off her debt that she begins selling appliances and turns into a tyrant at the office. When Max assures her that she doesn't care about getting the money back, Khadijah takes offense. She decides to get the money by selling ad space to a sleazy malt liquor company. Khadijah relents after Synclaire accuses her of being a sell-out. She accepts Max's loan in exchange for a two percent share in Flavor. Meanwhile, the guys quarrel when Kyle fails to reimburse Overton for their bowling night. Tag: Girls try to make milkshakes with 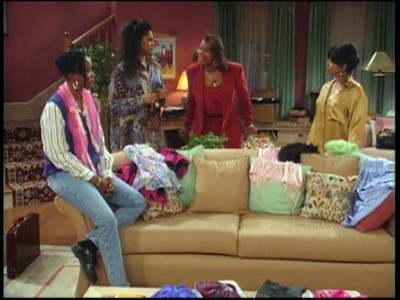