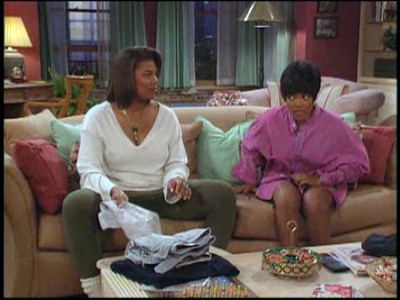 After Regine breaks up with her latest beau, a handsome attorney named Charles, she grants Max permission to give him a call. However, she is furious when Max goes to church and Sunday brunch with Charles. She suspects that Max doesn't even care about Charles, and is only using him to hurt Regine. Regine persuades a reluctant Khadijah to ask Max to break up with Charles. Max refuses, as she enjoys Charles's company and doesn't feel that Regine should always get her own way. Max later drops by the apartment and announces that she has dumped Charles. When Regine praises her for her selflessness, Max admits that Charles was the one who broke things off. The girls agree not to date each other's ex-boyfriends--unless he's really fine. Overton is forced to endure a slew of phone calls from lonely women when his ad offering handyman services accidentally ends up in the personals. Tag: Overton puts out toaster fire when Synclaire is distracted by phone calls.