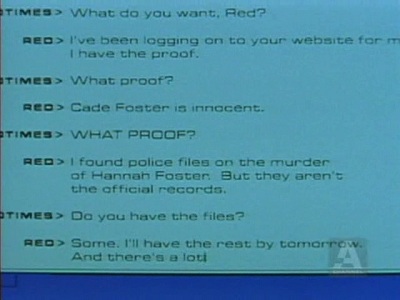 ""Quatrain 77, Century 9. Redemption is offered by a woman of scarlet, for the twice bless'd to seek out. Enter the belly of the beast and become one."" There's no more reason to hide. The ruse is over. The way I see it, we didn't have a choice. Eddie received a computer tip from a user known only as ""Red."" She said she knew about the Gua and that she'd found the true file on Hannah's murder and that the ones read at my trial were a fake. Traced the e-mail to a PD in Chicago, I had no choice but to go undercover. A convicted killer walking into a cop station sounds crazy, especially for a ""dead"" convicted killer. If I was recognized it would be feeding time at the zoo. I'm writing this now, so you know that's happened. But I couldn't stay away, the prize was just too huge. There was a secretary in Operations with red hair who hadn't been seen for a few days - she was our best lead. I had a few things going for me there, since the assassination of my clone on live TV the cops weren't look