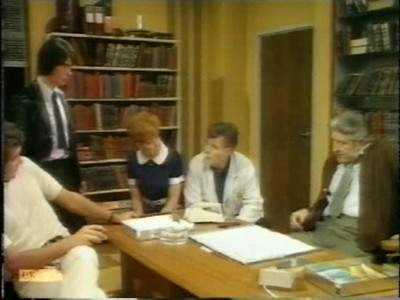 A geriatric hospital ward at Parkway and a very elderly patient, George Mason, connected to a drip feed, is delighted with a letter he has received telling him that his great-grandson is to be named after him. His fellow patient in the next bed, Mr Faber is pleased for him. Watching George on a small monitor screen are Doctors Carson, Eric Godfrey and the Duty Nurse who are all pleased for him. Godfrey thinks it is all thanks to the monitoring equipment which dominates the room in the form of huge units. 'The computer?' sneers Carson. 'It did not give him his great grand-son.' 'Kept him alive to see him,' points out Godfrey. They can hear voices from the monitor as the boss of the hospital is giving a conducted tour to VIPs of their impressive outfit. 'Whitaker's sunshine tours!' says Carson.