The TARDIS arrives some 10,000,000 years in the future on a giant spaceship. The ship is carrying all of the Earth's surviving plant, animal and human life (and is hence nicknamed The Ark) on a 700 year-long trip to a new home on the planet Refusis. The Doctors' companion Dodo has a head cold but the human Guardians of the ship, and their servant race the Monoids, have no resistance, and so a plague breaks out!! The Guardians place the travellers on trial and Steven has to defend them against the charge that they deliberately spread the disease. However, the Doctor finds a cure. The TARDIS leaves the spaceship only to arrive back there as it is approaching the end of its voyage. As a result of the earlier plague, the Monoids have now grown strong and enslaved the humans. They plan to make Refusis their own but the Doctor persuades the two races to live together in peace. 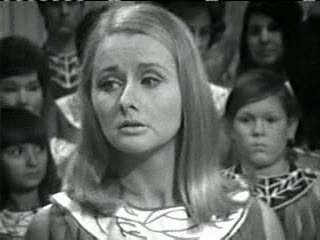