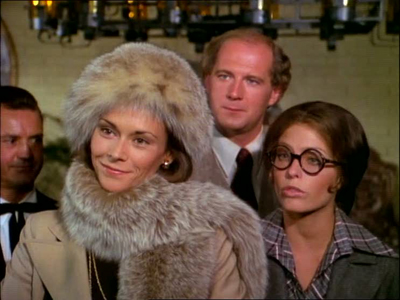 The wealthy Vincent Le Mer has been missing for seven years, and is about to be declared legally dead. His daughter, Janet, has not been in contact with the family for some time; so his second wife will inherit the estate. Kelly shows up at the house, posing as Janet Le Mer. Mrs. Le Mer and her associates accept her story, but try to poison her. Kelly is exposed as a fraud when the family receives word that the "real" Janet (actually Sabrina) is on her way to town. Kelly claims to have inside information about the Le Mer fortune, and promises to keep quiet about the attempt on her life in exchange for a share of the estate. Sabrina shows no interest in the inheritance, save for a portion of swampland that she would like to convert into a bird sanctuary. Bosley snoops around the swamp and allows one of Mrs. Le Mer's cohorts to capture him. He claims that there is oil on the property. Panicked, the man tries to dig up Mr. Le Mer's body and remove it before the property transfer can take place. The Angels, with some help from the police and a friend of Janet's, catch him in the act and apprehend him. The Angels learn that their client was Janet Le Mer, who had hoped to expose the truth about her father's murder.