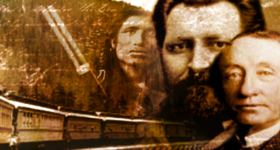 The 1870s and 1880s are a time of trial for the young Dominion of Canada. The country's first Prime Minister, John A. Macdonald, faces economic depression in the fast-growing factories of the east and a new revolt in the west, led by his old nemesis, Louis Riel. The suppression of the Northwest Rebellion and Macdonald's single-minded insistence that the French-speaking Catholic Riel must hang for treason threatens to tear apart the fragile bond between Quebec and English Canada. During this same era, debates over provincial powers and the Manitoba Schools Question rage, and a dream is realized: the Canadian Pacific Railway links the country and opens the prairies to new floods of immigration.