With the search for the Northwest Passage and the expansion of the Grand Banks fishery, the New World soon becomes a destination for permanent European colonies, in Newfoundland and along the St. Lawrence. Samuel de Champlain begins his legendary journeys, and the precarious beginnings of New France are established. It is an era of unprecedented alliances and devastating conflicts with native people, driven by the merchants' search for furs and the Jesuits' quest for souls. After a half-century of struggle, with the colony on the verge of extinction, Louis XIV takes personal control, sending French soldiers to defend the struggling outpost and eligible young women, the "filles du roi," to become their wives. 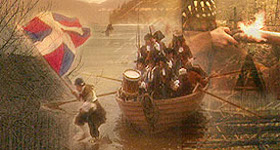