The opening episode of this 16-part documentary ranges across the continent, looking back more than 15,000 years to recount the varied history of the first occupants of the territory that would become Canada. From the rich resource of native oral history and archeology come the stories of the land's first people - how dozens of distinct societies took shape, and how they encountered a strange new people, the Europeans. Among the earliest of these epoch-making encounters is the meeting between Jacques Cartier and Donnacona, the Iroquoian chief whom Cartier first met on the Gaspé shore in 1534 and later kidnapped. Later on the Pacific coast, Nootka chief Maquinna encounters John Jewitt, the English sailor who became his captive and eventually his reluctant friend. 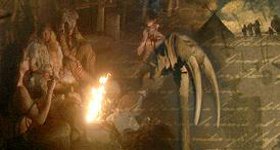