Nigel searches the early Mongolia deserts and forests for Therizinosaurus, who has massive and very long claws. On his journey, Nigel dashes across a nesting ground of Protoceratops into a forest ruled by Velociraptor and then into the path of a Tarbosaurus. He also finds a Mononykus and discovers they have feathers. At a water hole he finds a pack of Velociraptor, hunting him. After he returns to the water hole (escaping the raptors using a fog horn) he sees a Therizinosaurus fend off a hungry Tarbosaurus with its formidable claws. Nigel then finds that Therizinosaurus is a herbivore that uses its sickle-claws to hook tree and bush branches towards its mouth. Time: 75 Million Years Ago Period: Late Cretaceous Place: Mongolia Dinosaurs encountered: * Saurolophus * Protoceratops * Velociraptor * Mononykus * Pterosaur * Tarbosaurus * Therizinosaurus 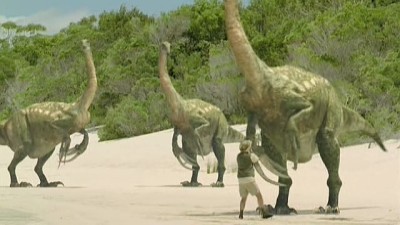