When it's Geraldine's 40th birthday she doesn’t want anyone to make fuss but they instead decide to cheer her up they send her to a dating agency, but when she sees all the council have decided to go as well, she gets nowhere. Meanwhile it's the 20th anniversary of Band Aid, and the vicar wants to do something special, but finds out that no one cares. So at the end she showed them all a video from the poverty website, which then makes them all care. 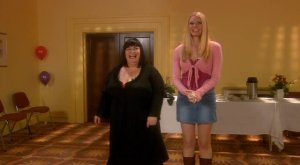