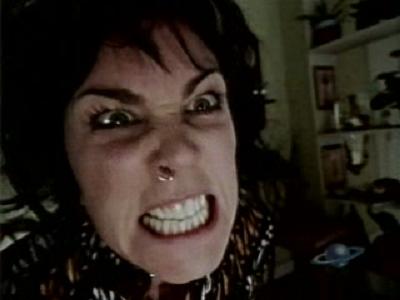 What Will the Neighbors Think?

Mona Bailey (Jane Adams) lives with her husband Ned (Peter Outerbridge) in the Clackson Arms, an old apartment building that is being taken over, apartment by apartment, by a mysterious developer called KM Inc. Mona is a hypochondriac, an able-bodied woman who rides a wheelchair, who treats the Physician's Desk Reference like a personal bible and who has not left the building in six months for fear of catching a disease. One day she backs her wheelchair into an electrical box and gets a shock, leaving her hearing strange voices and seeing bodies dropping out of windows. At first she thinks she's going crazy, but as the voices get louder, she realizes that she is hearing her neighbor's thoughts. Suddenly, she is privy to all their secrets. She knows that Dom Pardo (Garwin Sanford) likes to wear the panties of the women he seduces, like Shirley (April Telek) and Delia (Tabitha St. Germain). She knows Shirley's husband Vince (Brent Stait) suspects his wife is hav