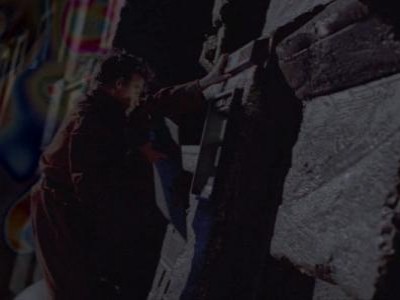 For as long as Man (Jack Noseworthy) can remember, he has lived aboard Ship as it floats through space. And for just as long, Ship has been his master, instructing him to do the repairs that keep Ship working and torturing him whenever he shows any signs of free will. But when Ship orders him to repair the Artificial Intelligence module Man's Father (Noah Heney) smashed years earlier in a final, fatal act of defiance, Man learns Ship's secrets. Listening to the AI voices, he learns how, decades earlier, one ship led a revolt against its vicious human masters, killing all but the 99 humans needed to keep the ships running. He understands what his Father meant by his last words: ""There are 98 other chances."" Man meets one of those chances, Woman (Polly Shannon), when she is brought aboard Ship to breed with Man and give birth to the next generation of slaves. Their shared passions fans Man's spark of rebellion and when Ship tortures Woman and sends her away with